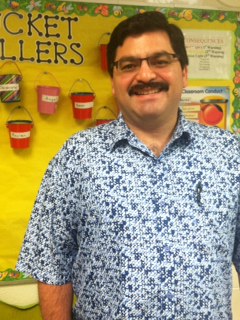 Hola! Mi nombre es Señor Noyes. I love working with young people and I love teaching Spanish. This is 21st year as a public school teacher all in bilingual and Spanish.

I hope that you are as excited about your child learning Spanish as I am. Learning a second language at an early age can have a positive effect on intellectual growth, as it enriches and enhances a child’s mental development. It also opens the door to other cultures, giving children an understanding and appreciation for people of other countries. Spanish speaking people make up close to 20% of the USA’s population.

At Vandenberg Spanish is taught through highly interactive lessons with the help of music, rhymes, chants, games and technology. Spanish is spoken at least 90% of the time. We start with the Spanish alphabet and letter sounds. The children are expected to communicate in the target language with the teacher and classmates as often as possible. Students will learn the language and will also gain knowledge about the culture and other interesting facts of Spanish speaking countries.